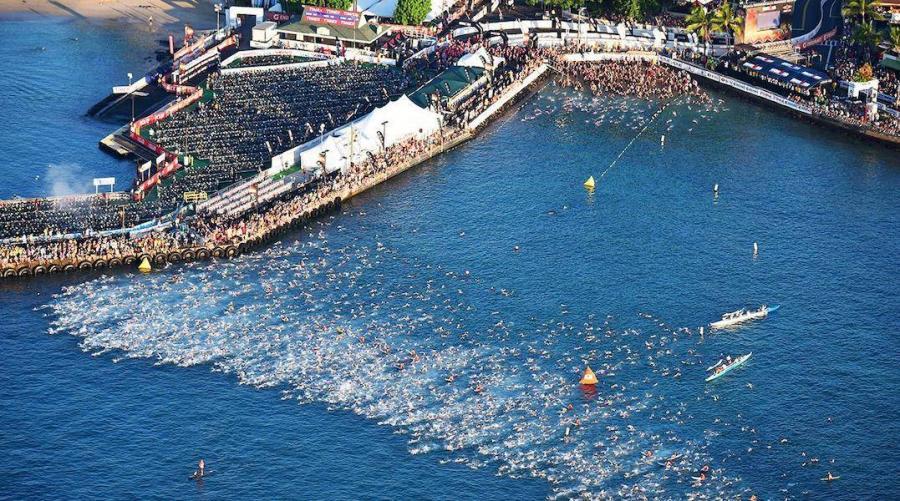 Clausmark Inside: Congratulations to our colleague for his successful participation in the Ironman Hawaii

Our colleague Maxim can now officially call himself “Finisher” of the legendary Ironman Hawaii!

After 9:48:26 hours he finished 30th in his age group at the IRONMAN World Championships in Kailua-Kona on Hawaii. Congratulations, Maxim!

On October 12th, a remarkable 279 athletes from Germany will compete in the Ironman World Championship Hawaii on Big Island:

The first Ironman on Hawaii was held in 1978 and is considered the ultimate event for every athlete: 3.86 kilometres of swimming in the Pacific, 180.2 kilometres of cycling and a marathon of 42.195 kilometres.

Our colleague Maxim is one of them. As a Director at Clausmark, Maxim Hrabowski is reponsible for the Development. At the Ironman he is our “Man of Steel”.

By finishing fifth in his age group (M45) at the European Championships in Frankfurt, Maxim qualified for Hawaii.

Always keen on sports, Maxim ran his first half marathon in 1998 – just like that, without any training, but in less than two hours. Besides learning, there was little time for sports activities during his studies – until our development manager  developed in a new direction at the age of 30, from a smoker to a passionate sportsman.

Running has been part of his life since 2004. After 10 marathons Maxim discovered the triathlon. In 2009 he started with the half distance, until he dared to run the first long distance in 2010 and finished after 9:30 hours.

As a result of continuous training Maxim has already been able to gain numerous successes – one of his most recent successes is Vice-Champion Baden-Württemberg in his age group at the Breisgau Triathlon in Malterdingen in mid-August 2019.

After the last tough training session on Saturday last week, Maxim is gathering his strength before he leaves for Hawaii on Thursday.

Before the race there will be room for an exciting preparation time organized by a special Iron-Man-Hawaii tour operator.

Espresso in the ocean

Particularly motivating for him will be an occasional espresso at the Kona Coffee Boat: a floating espresso bar which treats the athletes with Hawaiian coffee specialties at the swimming course during the week before the race.

On Saturday, 12th October, 7.30 a.m. local time (7.30 p.m. MET), it will be time for all of us, and especially for Maxim’s wife and his two children, to watch the race.
The race can be followed either via the livestream on sportschau.de starting 6:45 pm or from 11:55 pm on live television in the ARD. We are eagerly looking forward to Maxim’s experiences.